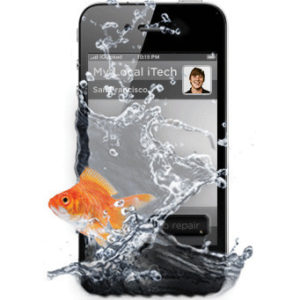 You might laugh at me but I was having a nanny nap with my son, and as I was drifting off, I went to put the phone on his bedside table.

I realized that the table should have been lower than where my hand stopped and then fully waking and realizing, I was putting the phone into a fish tank.
Being so tired, I put the phone down and didn’t even turn it off. (which that should be the first thing you do with water damage).

When I woke in the morning it would not turn on (even though about 80% battery left) – there was still water dripping out of power and sound buttons (not good!)
Plugged in the power and turned on but kept rebooting so I quickly powered back off.

Stuck the phone in rice for a few hours and still no good. Even got a heat gun over the phone.

This is where it went well and this is 12 hours after the incident. I then proceeded to get an air compressor and blow out any water I could (without pulling apart).
The touch screen become a little responsive but started rebooting again. I even had MORE water marks and streaks on the LCD between the touchscreen and LCD (internal)

Now this is the fix for a water damaged iPhone which might even work on Android/Samsung but not tested.
I could get the water dried, it wasn’t a hot day either. So I placed the phone on the dashboard of the car, closed all windows and got the phone as hot as possible.

After a couple of hours I went to the car and tried turning it on…. Guess what – it said TEMPERATURE TOO HOT… I thought good, lets leave it there for most of the day.

Went back 4 hours later, not only did it turn on, the screen was working perfect and even better, all the water streaks were gone. Its just like the new screen I paid $200 for 2 weeks ago on teh same phone.

Hopefully this will help someone else.

(PS I am extremely careful with my phones, and in 3 years, two incidents in two weeks… Argh!)