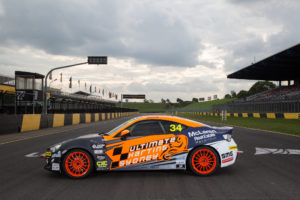 Sydney racer Tim Brook is stepping up preparations ahead of the 2017 Toyota 86 Racing Series.

Hailing from Oran Park, Brook finished the inaugural season of Toyota 86 Racing fourth out of a 46-driver field.

This season Brook is looking to build on his strong 2016, and will be joined by the crewÂ with which he won the 2014 Formula Vee Australian Title.

Wev’e got David and Jason Cutts helping me this year, Brook explained. David helped me win my first State Championship in Formula Vee back in 2013.

Then, jumping in the new Jacer for 2014 and 2015, we won an Australian Title together, so it’s good to continue that relationship.

Former open wheel racer Mark McHenry has also come onboard for the year to prepare the Ultimate Karting Sydney entry, the trio of new faces joining Warren Espie who continues his role as lead mechanic having worked with Brook throughout 2016.

Making it all possible is Narellan based Ultimate Karting Sydney, Cosmo Cranes, and McLaren Real Estate, who have all thrown their support behind Brook forÂ 2017.

Ultimate Karting Sydney are the car owners, and they’re our main supporters; Garth and Christian have really helped me out,â€ said Brook.

Cosmo Cranes has also jumped on board, so has McLaren Real Estate, and together with Ultimate Karting Sydney are our major supporters.

we have also been lucky that some of the partners that were with me last year have come back on board, so now it’s about getting the job done on track!

“Without them we wouldn’t be here, so we really can’t thank everyone enough.”

Setting the lap record at Winton at the opening round of 2016, Brook went on to claim four podiums throughout the campaign, and finished in the top five in eleven of the year’s 14-races.

“There’s a lot of really fast drivers this year though, so it’s going to be tough from the first race in Phillip Island right up to the last race in Newcastle.”

The opening event of the 2017 Toyota 86 Racing Series takes place at Phillip Island in May, the first of a five-round series that takes in Townsville and three events in NSW, including the famous Bathurst 1000 at Mount Panorama.

All races and qualifying sessions throughout the season will be broadcast live on Fox Sports, channel 506.