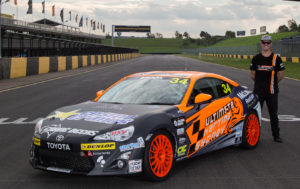 The Ultimate Karting Sydney driver recorded the fastest ever lap at Sydney Motorsport Park during the third round of the series last weekend. The impressive time took Broom to third in the points standings.

The goal coming in was for third in the championship at the end of the weekend, he said. We basically took third out in the opening race and built on that in the other two races. Last year we had three fourth places, this year it was fourth and two fifths, but last year we didn’t have the pace that we had this year.

Brook was a feature at the top end of the time sheets throughout the weekend so he was comfortably among the race leaders in the opening races.

“We had the pace of (race winner) Cameron (Hill) and Jimmy (Vernon) in race one and then I think because of where our speed came from, I think we wore our tyres out a little bit too much in race two.

In race three they got that gap and then it just seems like it stayed the same. We did drop away a bit in end, but that was probably because the damage was done to the tyres.

Brook said he has enjoyed a remarkably consistent run, recording five consecutive top-five finishes in the 2017 Toyota 86 Series since the opening race at Townsville in July.

There are only two rounds remaining with the next taking place at the iconic Mount Panorama. You can’t be too upset anytime you get to race around there.

I’ve only got to do it once, and that was a pleasure. We were towards the front there so we’ve got some good data and bits and pieces to look at to make sure we’re there from the beginning.

The next race in the series will take place at the SuperCheap Auto Bathurst 1000 on October 5 to 8. 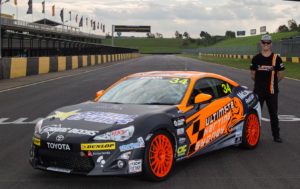 Unfortunately Tim was ‘taken out’ , no fault of his own at Bathurst on Saturday. The damage was so bad that he could not complete the 2 races on the Sunday.
This pushed Tim down from 3rd to 9th position because of the two DNF’s.

It also means Tim and the UKS car will be out of Newcastle as well.

Tim has a lot of support from fans, friends and business partners, and we wish him all the best for 2018.